South Africa: Bungy Jumping the Garden Route and Relaxing on the Wine Route

The drive on the Garden Route takes you past the most Southern tip of Africa and along the coast of the Indian Ocean side of the African Continent ending in Tsitsikama. The hardest part about it for us was that you drive on the left. For the life of me I couldn’t get used to it and it was one of the funniest and most unexpected hilarities on our trip so far. It was just habit to go to the right side as the passenger and we found ourselves on countless occasions opening the doors and about to sit down, only to realize we were on the wrong side again. To get to the start of the Garden Route from Cape Town, you drive through agricultural land and rolling hills that are dotted with mustard fields, ostriches wandering, and sheep grazing, some of them butt naked from a recent wool collection.

The first stop on the Garden Route from Cape Town is Mossel Bay. It’s a sleepy little surfer town with surfer dudes and dudettes suited up, some heading down to catch their next set of waves, others salty and walking back from a sesh. 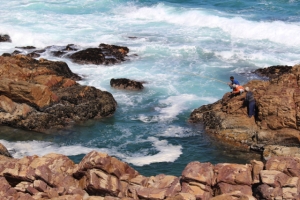 The drive from Mossel Bay to our favorite stop on the route, Wilderness, was a scenic ocean view passing through the larger town of George. We made a quick stop in Vics Bay to stretch our legs and enjoy the view. There were some local boys doing back flips off the railing of the walkway and seemed to be having a blast. 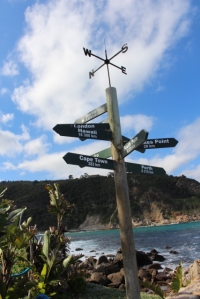 We arrived in Wilderness in late afternoon and after so much driving, we were tired but felt like we needed to get out and move. Ronen decided to rent a surf board from our hostel, Wilderness Beach House, and he went out to try to catch some waves for about an hour while I sat onshore taking pictures and picking shells. Ronen did catch a few waves in one of the most white shark inhabited areas of the cape during their dinnertime. 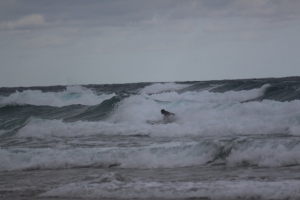 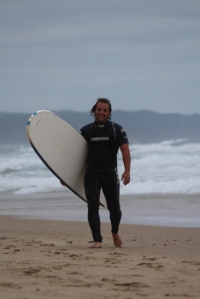 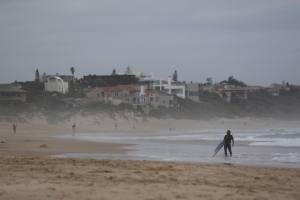 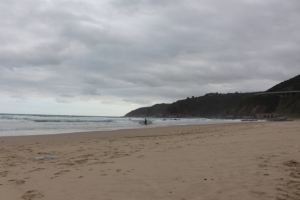 After our beach and ocean time, we went to dinner at a restaurant called Cocomo in Wilderness. It was delicious! One of the best meals we have had throughout our travels so far. Ronen had Springbok and it just melted in your mouth it was so tender. In the morning we went to see the Map of Africa, which is a place in Wilderness that the river winds around a hill and has shaped the hill to look like the African continent.

We also made a pit stop at the Big Tree. The tree is estimated to be around 800 years old and is so big around that it would take eight grown men holding hands to wrap around the base. 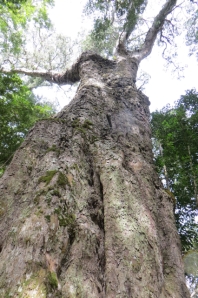 When we were leaving Wilderness we drove through another slum and Ronen had decided to give his jeans to someone in need. We saw two young men walking on the side of the road so we pulled over and rolled the window down a bit and handed one of them the jeans. The smile on his face is something I won’t forget.

From there we headed to Tsitsikama. Our end goal was to jump off the world’s highest bungy bridge, a whopping 216 meters. As we got closer, I began questioning whether or not I really want to throw myself off a bridge. We have both gone skydiving and abseiling but bungy jumping just seemed scarier to me. When we arrived to Face Adrenaline for our jump off Bloukrans Bridge I was still undecided on whether or not I would jump until I saw a sign that said:

I decided, I couldn’t let Ronen jump and me be the wimpy one that didn’t and I knew I definitely couldn’t allow myself to regret not jumping when I had the chance. Before I knew it we were on the bridge and I heard the countdown, “5-4-3-2-1-BUNGY!” and I was flying through the air screaming and thinking that there was no way I would survive it. Then the bungy tightened and I realized I was going to live and said out loud, while still upside down, “Holy SH**!!!! That was incredible, when can I do it again?” They brought me back to the top of the bridge in time for me to see Ronen jump.

This is the bridge we jumped off:

View from under the bridge looking towards the Indian Ocean:

Here I am waiting to jump

Ronen being hoisted back up:

When we were done my eyes were bloodshot from the blood rushing to my head and I couldn’t sit down for a good 20 minutes because the adrenaline was still pulsing through my veins like a tsunami. We made our way to the car and by then I had finally relaxed enough to sit and ride to our next destination. On our way back to Cape Town, on a recommendation for the operator of the hostel in Wilderness, we had decided to drive the Wine Route, R62. She had recommended stopping at Warmwaterberg, which is a hot spring in the middle of nowhere that they pipe the hot water into pools and bath houses. The drive there through the Karoo was stunning, especially at sunset. The sun light up the mountains so they looked like they were dripping gold.

When we made to Warmwaterberg it was dark. We pulled in 10 minutes before reception closed and miraculously, they had one room remaining due to a cancellation. It was a bathhouse built in the 1800’s complete with a private bath, a fireplace, and a half-door looking outside so you could see the incredible star view while soaking in the bath. We obviously didn’t hesitate to take the room since we had driven 8-9 hours and there was no way we were going to get back in the car, plus, what are the chances that such a fabulous room was all that was available? Seems like a stroke of good luck. 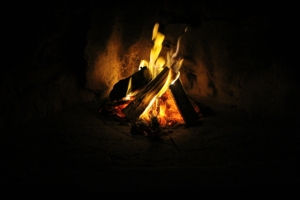 After a very relaxing night and a fabulous nights sleep, we woke up a finished our drive back to Cape Town. The drive was gorgeously sunny for the first 2/3 with almond orchards and vineyards lining to road one after another. 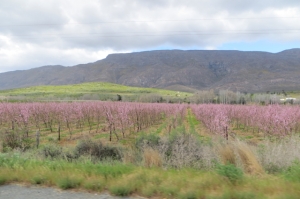 When we got closer to Cape Town, the weather became rainy and a bit chilly but because of the rain and the snowmelt, there were hundreds of waterfalls cascading down the mountains into the valleys and gorges on both sides of the road.

After arriving in Cape Town we checked back into Ashanti Lodge and began the process of charging all our camera batteries and getting all of our stuff ready for an eight-day camping safari in Botswana.

2 thoughts on “South Africa: Bungy Jumping the Garden Route and Relaxing on the Wine Route”