Grand Tetons: OUT WITH A BANG!

FUN FACT: Grizzly bears can climb trees as cubs but after a few years, their claws are too long (up to 4 inches!) that they lose the ability. Also, grizzly bears can run as fast as a horse, about 30 mph, and have been known to sprint 180 feet in just 3 seconds. These are two very good reasons why you should never run from a grizzly bear! (Source: http://www.greatfallstribune.com/assets/pdf/G190846116.PDF)

When we left Yellowstone, it was a quick 10 minute drive south to Grand Teton National Park. The drive into the park was beautiful! 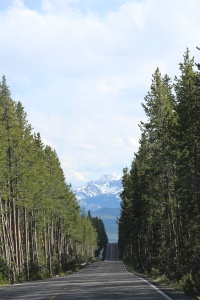 I was so relieved, the weather was finally a balmy 70 degrees which meant that I didn’t have to have 5 layers on! We found a camp site at Colter Bay and then explored the bay area a little bit and found an 8.8 mile hike called Hermitage Point that we thought might be perfect for the next day. We made some buffalo burgers for dinner (delicious!) and enjoyed a nice and warm evening by the campfire, the first time I wasn’t cold and I was actually comfortable, in what felt like weeks.

In the morning we headed to the Visitors Center to look into backcountry permits and get details on the Hermitage Point hike. On the way we saw a beautiful fox!

We found out that most of the backcountry was still heavily inundated with snow and would require ice gear to access it so we opted to do longer day hikes rather than attempt to scale icy valleys when we had zero experience with something like that. One of the rangers did tell us that his favorite hike was Hermitage Point so left for what ended up being the best hike of my life.

The start of the hike runs along the edge of Jackson Lake with views of the Tetons and then climbs up a little hill to Jackson Lake Overlook before dipping back down next to Heron Pond.

At Heron Pond, there were beautiful white pelicans, Canada geese, and a ton of different species of ducks.

We strolled along the pond and then when were about 5 minutes into the forest we met a group of six people, wide-eyed and with their bear spray unclipped from their pack, in hand, and ready for use. We soon learned that several hikers had just encountered a mama grizzly with two cubs walking along the trail and they had apparently surprised her and she stood up on them. The two hikers spoke calmly and slowly backed away and were unharmed. The two hikers then encountered this group of six and told them what had happened. The group decided to continue hiking and make plenty of noise in order to not startled mama bear. Apparently, they hiked for about 30 minutes and then decided to turn around only to see mama bear walking along the path heading the same direction they wanted to go. This mama was smart, she knew the path was the easiest for her cubs and that she could just dip into the forest, let the humans walk by without ever noticing her, then get back on the path again with her cubs. So, now armed with new information, we decided that we would keep hiking, make lots of noise, “Hey Bear!” or “Hey Mama” and have our spray ready. We hiked for about 30 minutes in this manner and just as I was about to say, I bet we passed her already and we never even noticed, I saw a flash of brown to my left and there she was, 20 ft from the trail. I said to Ronen, “Holy Sh*t! There she is!”. We could barely see one cub curiously poking its head up behind mama bear to look over her back. We took enough time (maybe 45 seconds) to snap two quick pictures, said thank you to mama bear for allowing us to experience her, and moved on, still making plenty of noise and looking behind us on the trail.

I was shaking so hard I thought I was going to pee my pants. This was one of the most incredible wildlife encounters in my life. The only things that have come close are diving experiences and I feel so incredibly lucky to have been a part of such a rare encounter. What I will say, is I felt that this encounter with mama bear and her cubs was positive, she knew we were coming, we kept our voices calm, and we didn’t over stay our welcome.

We kept on hiking and saw mama bears very fresh poop on the trail, and then a bald eagle soaring high above us. Soon we found ourselves at Hermitage point, with stunning views of the Tetons.

We rounded the point, found a little beach to make lunch, and sat down to relax and allow the experience to sink in.

After lunch, we came up a hill and I spotted four Sandhill Cranes, walking in the sage brush. I am pretty sure it was 2 mating pairs strutting gracefully through the brush. We sat on top of the hill and just watched them for 5-10 minutes. They seemed so dignified with the poof on their tail and the red marking on their heads. 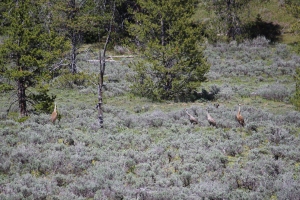 After enjoying the cranes, the trail then curved back into the forest and ran along a marshy area. There is a trail that connects with the Hermitage Point trail that goes all the way around the marsh that was closed due to bear activity as well as an aggressive cow elk that had just calved and was charging people. This marsh area has been known to have the rare and endangered Trumpeter Swan nesting at it and there was 1/2 mile section that was open so we walked a little ways in and we were looking at our map trying to decide if we wanted to go the 1/2 mile or not when I looked up and saw cow elk staring at us. I couldn’t help but laugh because the look on her face probably mirrored mine since we had apparently startled each other.

Since the elk was along the 1/2 mile section of trail, we didn’t want to disturb her so we started back into the forest. This section of the Hermitage Point Trail runs about 100 yards from the edge of the marsh so we occasionally went off the trail to try to catch a glimpse of a moose or some other kind of animal cruising in the marsh. We didn’t get to see a moose but we were lucky enough to see a Trumpeter Swan with her two cygnets munching of weeds with their butts in the air and leisurely swimming around the marsh.

The trail then reconnects at Heron Pond where we saw two bald eagles soaring above the pond and a Gardener snake slithering through the grass and attempting to hide under a downed tree.

We then finished up the hike about 5 hours after we started and decided to go the Jackson Lodge to have a few drinks and some pupu’s (or appetizers for anyone unfamiliar with the awesome Hawaiian term) at the Blue Heron Lounge. This lounge has beautiful views of the Tetons over Jackson Lake as well as the Willow Flats and pretty good food. A ranger had also told us that he saw 2 wolves at Willow Flats last year so Ronen brought his binoculars in with him and was scanning the marsh for wolves.  I was busy chatting and drinking my wine when all of a sudden Ronen said, “Wolf!” and jumped up and ran outside. I never saw a thing, but apparently, he saw a black animal run through a grassy opening like a dog. It cleared about 50 yards in three strides. We then made a few friends and stayed and chatted and drank until about 11pm. It was the perfect cap to an awesome day!

The next day we were thinking of going on a different hike up a canyon that has frequent moose sightings but there was still too much snow so we headed to the southern part of the park. Along the way we saw bunch antelope and a coyote. We went off the main road onto a narrow winding road towards Lawrence S. Rockefeller Reserve. We were going to do the Phelps Lake hike but we spoke with a family who said they didn’t see any wildlife except for some squirrels and geese so we decided that we would just revel in Hermitage Point hikes glory and head home. At this point, we were hoping to see a moose, the one thing besides wolves that we had REALLY wanted to see but hadn’t seen yet. I said to Ronen, “Come on moose, show yourself!” and bam, about 500 yards down the road in the marsh was a bull moose, just sprouting this years antlers draped in soft brown velvet.

We decided at that point that Grand Teton National Park had been VERY good to us, incredible in fact, and we said goodbye to the park that gave us some of the best experiences of our lives.

← Jellystone with Yogi
The Summary: 5 National Parks in 3 weeks… →

5 thoughts on “Grand Tetons: OUT WITH A BANG!”