We have no deadlines to meet, no schedule that we must stick to, we are FREE. Free to do, free to be, free to go anywhere whenever we want to, and that is an incredible feeling. Actually, incredible is an understatement. It is supercalifragilisticexpliatildocious.

This road trip was the maiden voyage for our sleeping bags. When we bought them, we figured that 40 degree mummy sacks would be sufficient but apparently, if the temperature is even a little bit below that, say at 37 degrees plus 15-20 mph winds like it was at Bryce Canyon National Park, then you will freeze your ass off. We woke up at 5 am laughing at how cold we were so we packed up our tent and jumped into the car with the heat on and headed to our hike. We made coffee in the parking lot and left for one of the most visually intriguing and beautiful hikes I haven been on in my life through the Hoodoos of Bryce Canyon. We hiked from Sunset point to Sunrise Point on the Queens Garden trail. The Paiute people began living in the canyon in 1200 AD and believed that the Hoodoos (the large spires that look kind of like totem poles) were people who had been turned into stone by the trickster Coyote because of bad deeds that they had committed. 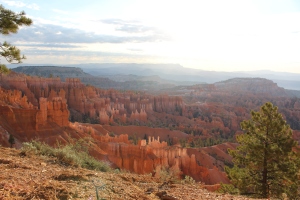 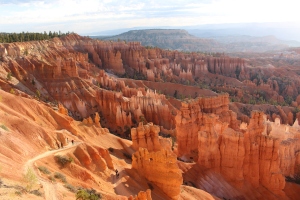 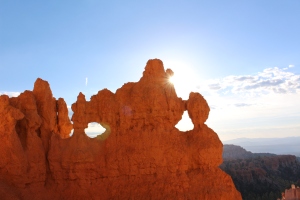 From Bryce Canyon it is only a 1.5 hour drive to Zion National Park. We had originally planned on spending only one night in Zion but we loved it so much that we stayed 2 nights and did 4 different hikes. The National Park Service has shuttles that take you to 9 different stops in the national park and it takes about 80 minutes round trip. Unless you have a backcountry permit or are staying at Zion lodge, you cannot drive to the start of all the hikes, you must take the shuttle. We never had to wait for a shuttle because they are constantly running every 5-7 minutes and honestly, after the long days of hiking, it was nice to take a little cat nap on the shuttle. The first hike that we did was called the Hidden Valley Trail. The trail went up switchbacks and then turned off the main trail and continued up along the cliff edge. We had only about 4 feet of trail before the drop off to the valley floor below and in some sections we had to hold onto chain to prevent us slipping off the edge. The trail then wound back into a hidden valley that had a sand floor and was only about 6-10 feet wide with beautiful sandstone walls on either side. You could tell that during rain storms and when the snow melts in the spring that this valley would have a fast-moving stream that culminated in a waterfall dropping to the main valley floor. 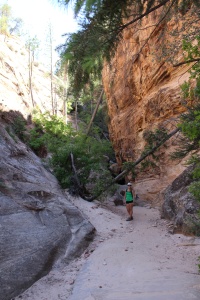 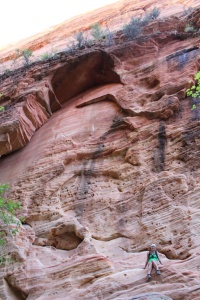 We then hiked back down and took the shuttle to the last stop, the River Walk, that had a paved trail along the Virgin River, the river that formed Zion Canyon. This was an easy walk and we took our time relaxing and taking pictures of the wildlife along the way. The deer and wild turkeys were amazing but Ronen was obsessed with the darn squirrels and was so excited about them that we ended up with so many pictures of squirrels. In his defense, in Israel they don’t have squirrels and in Hawaii, we didn’t have squirrels either, so his excitement is somewhat warranted.  After our leisurely stroll, we went to our campsite just outside of the park and set up camp, built a camp fire, and made dinner.

The next morning we woke up and got ready for Angels Landing. Angels Landing is probably the most famous hike in Zion and rightfully so. It is an intense 5 mile round trip hike up 21 switchbacks and then along the top of a ridge with drop offs of 1400 feet on either side of you. This was one of the craziest hikes I have done. There are sections of the trail that you are climbing up rocks and holding onto chains in order to prevent you from being blown off by the wind or sliding off because of the slick sandstone trail. Climbing up was strenuous but going back down was even more interesting because the trail isn’t wide enough for the people climbing up and the people hiking down to walk past each other so you have to “pull over” and let people pass you. I was really glad we started the hike as early as we did because there were more and more people coming up and it started to get really crowded. 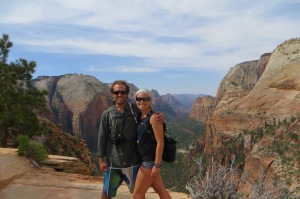 That afternoon we hiked the Narrows, a hike that criss crossed the Virgin River for miles and miles. We didn’t get very far into the Narrows, we only were able to hike back to the very beginning of the section of the river that is actually called the Narrows (about 1.5 hours in from the end of the riverside trail) but it was incredible. There were sections that had massive walls on either side and made you feel like you were Alice from Alice in Wonderland when she drank the bottle that says “DRINK ME” and shrunk because the cliffs were so tall on both sides of you that you could just barely see the blue sky peeking through above you. The water was about 50 degrees so it was definitely a bit chilly but it was also very refreshing after hiking Angel’s Landing in the morning. 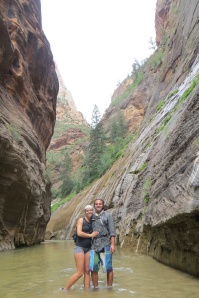 We finished the hike, went to dinner and then went back to our campsite to sleep. We woke up in the morning and headed to the North Rim of the Grand Canyon, which is only about a 2 hour drive from Zion. In order to get to the North Rim you drive through the Kaibab National Forest which is an incredible Ponderosa Pine forest with little meadows that dot sides of the highway and each one has at least 2 deer but most have 15 or more all lazily grazing on the fresh spring grasses. 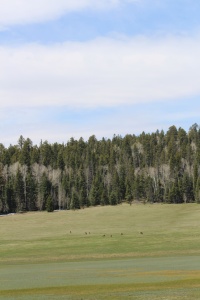 The North Rim was incredible! The rock formation and coloration are similar to Zion but the difference is that the Grand Canyon is MASSIVE! It’s so big that you can’t even believe that it is real, it seemed like a dream. I am so amazing that the process of erosion began only 12,000 years ago during end of the last ice age. The difference between the north rim and the south rim is that there are not near as many people in the north rim as there are on south rim (compare 3 million visitors annually in the South to 1 million in the North) and the north rim is forested rather than desert along the south rim. For us, the decision of North Rim vs. South Rim was easy because places with fewer people are more our style and there was the added bonus that the north rim was only 2 hour drive versus a 6.5 hours drive to the south rim.

Once we got into the National Park we were lucky enough to get a backcountry permit with the only camping spot at Cape Final. It’s a 2 mile hike one way and you meander through the forest until it magically opens up and you find yourself on the rim of the Grand Canyon. It was cloudy and about 50 degrees out with 35 MPH wind gust so we bought an extra sleeping bag to keep us warmer. Our campsite was only about 6 feet from the rim so it was a very good thing that neither of us sleep walk! We made macaroni for dinner and drank coffee to try to keep warm then watched the sunset. The sunset lit up the canyon walls making the shadows and light create a dramatic scene of color. We went to bed, and then the wind picked up, probably gusting up to 50 MPH. Neither of us could sleep because we were concerned about a storm moving in and camping only about 6 feet from the rim is dangerous in a lightning storm so we climbed out of the tent to see what was coming. To our surprise, there was no storm, instead the wind had blown all of the clouds from the day far away and there was an amazing starry clear sky above us.  We slept soundly after that and woke up for the sunrise. We hiked down the rim near our camp site after sunrise. It required some scrabbling down the rocks but we found a little animal trail that made it easier to get down. Once we got to a good spot, we made coffee and ate breakfast then climbed back up to the rim.  When we got back to our camp site, we packed up and hiked out through the forest, never seeing another person. It’s such a peaceful and beautiful thing to be alone in nature, enjoying the smells, sounds, and animals as they are every day. Once we were back to the car, we said goodbye to the Grand Canyon and to nature and headed to Las Vegas, the exact opposite of nature. 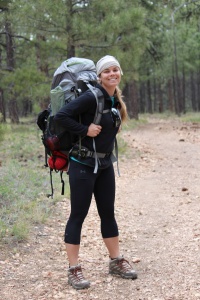 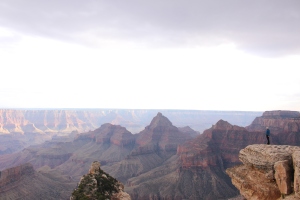 I will post later this week about the shock of getting to Las Vegas and Los Angeles after enjoying the quiet for so long.

7 thoughts on “The Canyons”